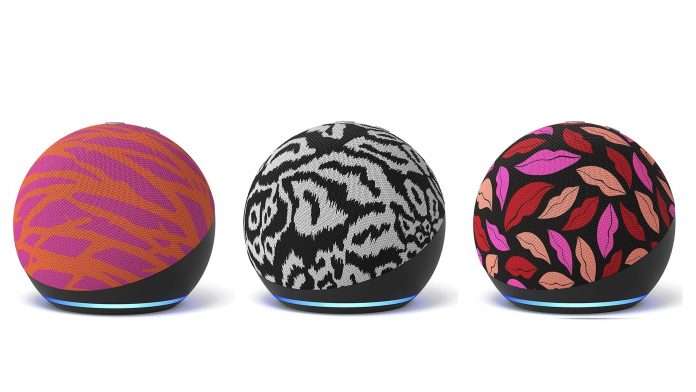 The main triumph of the Echo Dot is its uncanny ability to hide the Amazon’s eavesdropping AI assistant Alexa in plain sight. It’s a little bit easier to live with microphones around your house if you’re not constantly reminded of your voluntary surveillance, after all.

But now Amazon is giving buyers the opportunity to make the Echo Dot stand out significantly more with the help of fashion designer Diane von Furstenberg.

These cost 10 USD more than a usual Echo Dot, but Amazon says it will be donating to von Furstenberg’s chosen charity – Vital Voices – as part of the deal.

But there’s a catch: these smart speakers are currently Schrodiger’s Dots. They simultaneously exist and don’t exist, because they’re part of Amazon’s Build It initiative where a product only gets manufactured if there’s enough interest. Think of it as like Kickstarter, except instead of  plucky upstart one-person outfits bravely crowdsourcing money to begin production, it’s the company owned by the richest man on the planet shaking the coin jar.

Since Amazon Build It was introduced in February, only one product has been backed by enough people to get the Bezos thumbs up: a smart sticky note printer that is due to ship between July and September. It’s hard to believe that Amazon’s attempt to transplant Alexa’s brain into the body of a cuckoo clock didn’t capture the imagination, but there we are.

It’s hard to tell whether the fashionable Echo Dots will end with a similar fate for now. At the time of writing, Midnight Kiss has achieved 6% of its goal, Ikat is on 3% and Twigs is on 2%, but there’s a month to run, so plenty of time for this to beat the (cuckoo) clock. Of course, Amazon Build It is a US-only initiative, but you never know – maybe the Diane von Furstenberg Dots will prove popular enough to reach the southern hemisphere at some point.