What is IRL? Meet the social messaging and events app eating Facebook’s lunch

What is IRL? Meet the social messaging and events app eating Facebook’s lunch 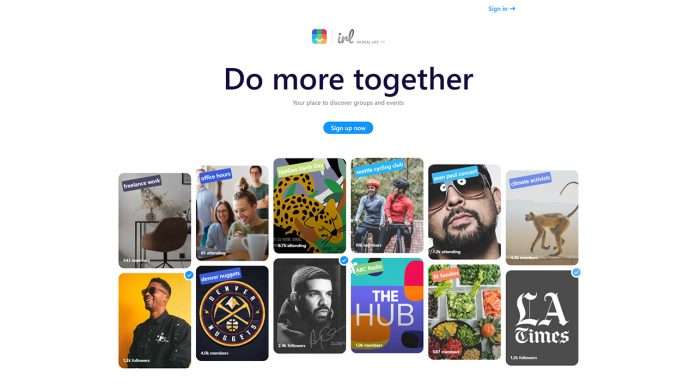 With apologies if this applies to you, the young people who kickstarted Facebook’s meteoric rise in 2004 are no longer young, and it’s no secret that the next generation isn’t exactly flocking to Mark Zuckerberg’s social network to replace them.

The likes of TikTok and Snapchat fulfil some of the communication functions, but what about planning social events? That’s the gap that IRL is looking to plug, and it’s already attracted some 12 million teen users in the US as well as some serious investment from big players.

While Instagram, Twitter and Snapchat look to supplement or even replace real-world interaction with a virtual equivalent, IRL – named after the longstanding online acronym “In Real Life” – is designed to organise get-togethers: concerts, 10ks, gaming nights, you name it.

Originally the intent was for this to be physical, real-world events, but the pandemic ensured it now has a healthy selection of virtual events, too. Indeed, Covid-19 meant the acronym briefly stood for “In Remote Life.”

That means that it’s part calendar, part messaging app with a touch of event discovery thrown in. Groups can be public or private with old friends or new ones you make along the way, and events can be created and shared as far and wide as you feel comfortable with. Any event you join will be automatically added to your public or private calendar, letting you bring interested groups with you along the way.

Its popularity with younger people in the US has meant that a few colleges have allowed students to use their .edu addresses to gain access to exclusive campus events.

You’d be forgiven for thinking that the founders of IRL have just reinvented Facebook, but if that sounds like a fruitless ambition, you may not appreciate just how little time young people have for Zuckerberg’s baby. “We’re building Facebook groups and events for the generation that doesn’t use Facebook,” CEO Abraham Shafi told The Verge. “There just happens to be no other product really focused on this space for the next generation.”

How popular is it?

By mid 2021, IRL boasted numbers of around 12 million monthly users and around two million daily active users. Over a billion messages have been exchanged since the chat functionality was enabled.

This was probably helped along by Apple listing it amongst its social favourites in the App Store, but while those numbers are undoubtedly big, they’re still some way behind the main social players. In the US alone, TikTok has nearly 100 million monthly active users, for example.

CEO and founder Abraham Shafi previously founded HR company GetTalent, and his co-founders include Scott Banister, Krutal Desai and Henry Khachatryan have been involved in the likes of PayPal and GetSponge.

How does it make money?

At the moment, like many software ventures, it doesn’t, really. But that doesn’t mean it hasn’t attracted substantial investment from elsewhere, most eye-catchingly a recent $170 million round of funding led by Japanese tech conglomerate SoftBank. That gives it a startling value of $1.1 billion.

IRL’s plans to make money don’t involve display advertising, with aims originally vaguely focusing on ticketed events, activities and classes. Since then, the company trialled a pilot where 25 influencers were allowed to set up paywalled chat groups with promising results: 1,000 people subscribed, paying an average of $70 per month.

Brands will eventually be able to promote events via the main discovery page, too.

IRL is free to download for iPhone and Android smartphones, and there’s also a web interface too.