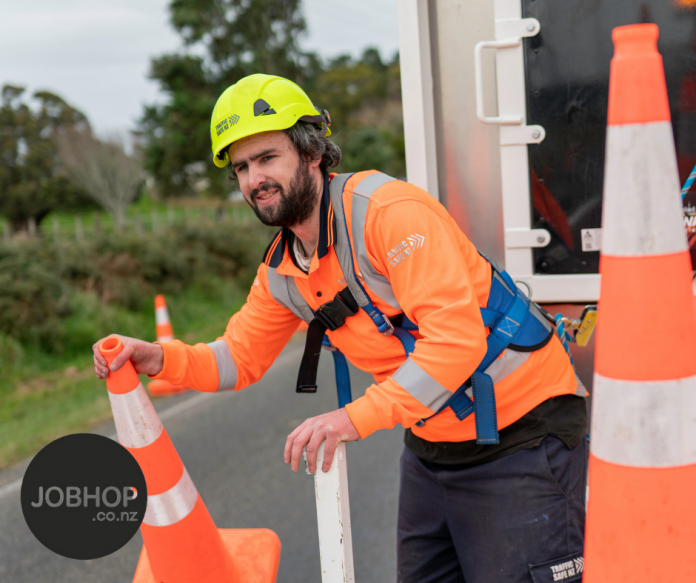 Occasionally described as “The Tinder of jobs” or “The Uber of employment”, Jobhop is an app that lets users “hop on” and “hop off” paid work, one hour at a time – and the app has now reached its version 2.0.

Jobhop frees up employers from worries around trial periods, induction and salaries. Benefits for workers are no-strings-attached paid work to gain experience and earn income – sometimes leading to permanent employment offers – although a cynical description for this is “the gig economy.”

Founded in Taranaki in 2018, Jobhop was created by Stephen Reed and Gordon Heggie with a kaupapa of “making the gig economy fair,” in Reed’s words.

The job-sharing platform went live in June 2020 after two years of development. Jobhop is operated out of New Plymouth by a team of eight and as of July 2021 had 350 employers and 1,800 workers registered.

Jobhop’s point of difference from other labour hire systems is Jobhop pays $25 per hour to complete listed jobs (deducting $3.50 for services, plus a listing fee); pays every day, multiple times a day; and automatically files tax deductions. Job Providers (aka businesses) credit their account before posting a job, creating the pool from which ‘Jobhoppers’ (workers) are paid – as often as twice a day. The system takes care of invoicing and remittance records, too. Workers don’t have to prove skills or qualifications, but as soon as a Jobhopper is confirmed for a job, their contact details are exchanged. Workers can then email copies of certifications as required or bring these on the day.

In terms of employment law, Jobhoppers are sole traders.

Jobhop was put to good use during 2020 when the Covid lockdown and recession caused Taranaki’s unemployment to spike. In the worst parts of the year, there was a 26 per cent increase in jobseeker numbers. Nationwide, the number of people claiming benefits in mid-2020 grew to a level “unprecedented in modern history”, the Ministry for Social Development reported. During the recession, unemployment-related benefits were predicted to double from 4.1% in June 2020 to an expected 8.1% peak in January 2021, while the rise in the unemployment rate from June 2020 to September 2020 was the biggest quarterly unemployment increase on record.

During the crisis, Jobhop offered a lifeline for people at the mercy of the redundancies and hiring freezes.

The concept of Jobhop – created a year before lockdown – dates back to when Stratford man Stephen Reed received a concussion while playing social basketball and needed ACC support. As he returned to the workforce, Reed was inspired by many people who would eventually become Jobhoppers. Inspiration came from people whose circumstances meant they were struggling to sustain reliable employment, lived in areas where there were few long-term employment options, had insufficient benefits, injuries, or restricted hours due to parenting and school.

Reed was additionally inspired by watching YouTube videos by Robert Kiyosaki, author of Rich Dad, Poor Dad, and also by finding out a family friend had been sleeping in their car. Across the summer of 2017-18, Reed worked with friend Heggie to lay out a business plan and recruit a coder to develop the application programming interface (API), as the two are not coders themselves.

Other challenges to respond to were compliance with tax, immigration and labour laws, marketing, attracting employers to advertise, as well as developing an understanding with the Ministry of Social Development.

Tech challenges the team had to get through – while bootstrapping, and scaling up steadily – were working out how to get users verified to receive payments; establishing compliance with anti-money laundering rules; getting Data Zoo to verify workers with Know Your Customer (KYC) technology; getting users paid automatically; and working out how to add texting and messaging functionality so Jobhoppers without credit on their mobile phones can use Jobhop.

Other tech milestones have been integrating with Xero, integrating with ASB, listing with Inland Revenue, adding identity-verification to the programme, becoming an FMA-registered trust, and building a referral reward programme. Jobhop has also included a star-rating system for workers, which is currently under rebuild.

Version 2.0 and expanding into Wellington

Heggie told theBit that the NZ Art Show in Wellington (June 5-7) was a big success and made the capital a significant new focus for finding workers. In setting up and hosting the show, “All labour and admin was facilitated through Jobhop and we found work for 44 people.” Heggie believes Jobhop ensured money flowed better for both the employer and employees, saving the organisers on costs and putting more in the hands of the workers compared to previous staffing arrangements. “It’s really opened us up to Wellington events,” Heggie said.

Heggie told theBit that version 2.0 has been about overcoming technical issues and challenges with the API. There were also business positions to update, such as adjusting the fixed $25 pay rate.

“V2 is way better – it’s got multiple pay rates, while still paying a minimum of $25, and you can offer it to multiple people.”

Version 2.0 also offers an affiliate programme by which a charitable trust can receive money back from hours worked by Jobhoppers.

Wellington is one of several new regions where Jobhop is operating (along with Queenstown, Te Kuiti, Hamilton and Whanganui) although Taranaki remains the focus.

Throughout the journey, Jobhop has been entirely bootstrapped by what Heggie calls “Ma and Pa investors” investing $10,000-$50,000, although Jobhop is ready with a pitch deck as it scales up and seeks larger investors.

What one employer thinks of the app

In trialling Jobhop, “You had to pre-pay the hours and then go looking for a suitable candidate,” Trigg told theBit. “I think they’ve altered that now – you can advertise the position, and scroll candidates… It now makes it less scary than whipping your credit card out, not knowing [the potential outcome].”

Trigg told theBit he appreciated how low-risk the experience was – with a good work ethic found in all but one of the four workers he paid through Jobhop.

Trigg added he felt some Jobhoppers’ profiles may not have been up to date – meaning an employer loses time attempting to message profile-holders who may not be looking for work right now. “There would be merit in [the developers] refining availability and preferences,” Trigg said.

Another improvement could be Jobhop increasing its pay rate even further. The rate of $25 per hour before tax would have seemed more significant in 2018 when the minimum wage was $16.50, however with the NZ minimum wage hourly rate having risen to $20 before tax on April 1, “You’re competing against all sorts of industries, so workers are picking and choosing,” Trigg said.

I registered as a Jobhopper in late February 2021 to try out the app.

The app issued a job code for an initial exploratory meeting, then submitted four hours of work, which required another job code. In both instances, the employer had to top up their account with Jobhop. Each hour of work had $2.90 deducted, then an advertising fee of $0.60 and withholding tax of $4.42 deducted, leaving $17.08 in the hand from $25.00 (31.7% deducted). I found the amount deducted surprising, though I was aware fees would be dedicated, and recalls he found the interface quick and highly efficient, with payment received within 1-2 hours of completing each job – which he describes as “the fastest I’ve ever been paid.” – Michael Botur

Jobhop is interested in matching employers and workers in all regions of New Zealand. https://jobhop.co.nz/